Sign up free
Use Fortrade to trade on Bitcoin

Technology seems to be marching along, and the global community is becoming increasingly interconnected through the internet. Among the advances is a move towards creating a cashless society in which all monetary transactions are conducted online. While not everybody agrees that this would be a good thing, there is no question that in many ways it would make life easier for many. Enter Bitcoin, which launched the world’s first decentralized cryptocurrency (also referred to as digital, or virtual currency) in 2009.

Bitcoin – The Promise and The Danger

The blockchain technology is excellent for Bitcoin and other virtual currencies, in that it is very difficult, if not impossible to hack (nobody has succeeded so far), and the public accessibility of the blockchain helps insure against fraud and interference by third parties. A second advantage is that the fees for online payments with Bitcoin are generally much lower than those of more traditional forms of online payment. To date, hundreds of thousands of businesses worldwide accept Bitcoin as payment for goods and services.

Being a decentralized currency, governments have not tried to regulate Bitcoin, in part because there is not a single prominent figure or deciding vote with the ability to veto. Rather, decisions are made by general consensus, and its founder is an anonymous person (or group of people) known to the world by the pseudonym Satoshi Nakamoto. This has played a significant role in the increased value of Bitcoin.

Despite all that, many analysts are very cautious when it comes to Bitcoins. The price rose so quickly (more than 700% from October 1, 2016 to September 2, 2017), that many are waiting for the proverbial “bottom to fall out.”

A second concern is that eventually the balance of supply and demand will shift, because there will only be a total of 21 million Bitcoins made available, of which there are already more than 16 million. At the same time, other cryptocurrencies, such as Ethereum and Litecoin, provide an unlimited supply of digital coins, so they may be able to overtake the industry-leading Bitcoin in the coming years.

How Does One Obtain and Trade Bitcoin?

“Mining” Bitcoins is both the verification process of Bitcoin transactions, as well as the method by which new Bitcoins can be obtained. Miners solve complex mathematical puzzles in order to release blocks of Bitcoins. Miners receive some as a reward for successful mining. Anyone can mine Bitcoins from their computer using free open source software, but as the number of people actively mining Bitcoins increases, so too does the difficulty in mining them.

With brokers such as Fortrade.com, as soon a trader creates a valid trading account and deposits a fiat currency to fund the account, he can begin trading the rates for Bitcoin. As with all of the major, minor and exotic currencies, trading Bitcoin CFDs is not something to take lightly or to invest large sums of money before learning the ins and outs of the market. Once you have determined effective long and short strategies for Bitcoin CFDs, the trading can be very enjoyable.  Click on the link below to open an account, and start trading!

Trade Bitcoin With Fortrade – Open FREE Account Today
Please note: Trading CFDs carries a high level of risk. Your capital is at risk.
For general information only. Not intended to provide investment or trading advice. 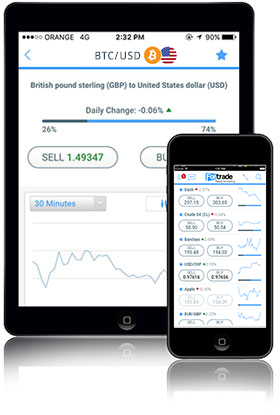