Sign up free
Use Fortrade to trade on Dash

When Bitcoin, the world’s first decentralized digital currency, first hit the market in 2009, it marked the beginning of a monetary revolution. Here was a fully functioning monetary system, unfettered by government oversight or regulations, offering transaction fees much lower than those of traditional banks.

Of course, no system is perfect, and there were some drawbacks with Bitcoin, the largest two being:

In January 2014, a new virtual currency was launched that was intended to offer the same advantages as Bitcoin, while improving on some of the premier cryptocurrency’s shortcomings. First known as Xcoin, the Darkcoin, in March 2015, it became known as Dash – a combination of Digital Cash.

What is Dash, and how does it differ from Bitcoin?

Whereas Bitcoin’s centralized blockchain enables anybody to see all transactions and account balances, the Dash blockchain is privatized, or decentralized, which provides users with much more privacy for their personal accounts and digital wallets. Unlike Bitcoin, the only person who can know how much money a Dash user has in his account is the Dash user himself.

Furthermore, the Dash conjoin mixing technique makes it impossible for outsiders to track transactions, because multiple transactions will be combined, thus hiding the trails of funds.

Like Bitcoin, Dash is a peer-to-peer (P2P) virtual currency. Unlike its larger, and better known predecessor, Dash is able to process and confirm a transaction in just seconds. While some other cryptocurrencies offer this as well, others are faced with the problem of Double Spending. This occurs when a buyer conducts two transactions almost simultaneously. In the window of time before the first transaction is confirmed, the system will mistakenly “believe” that the funds used in the first purchase are still available for the second one, and it is possible that a buyer will spend more than he has available in his account. Dash’s InstantSend feature automatically freezes funds as soon as the money is sent, even before the transaction has been confirmed.

One additional similarity between Dash and Bitcoin is that both have a predetermined upper limit as to how many virtual coins will be made available to the public. While the last of the approximately 21 million Bitcoins will not be mined until somewhere around the year 2140, within about 20 years from now, there will already be more than 99% of the total in circulation, which will significantly affect the supply and demand balance.

Dash, on the other hand, is expected to produce about 18 million coins, the last of which will not be available until sometime around the year 2300. This means that the supply and demand balance will remain much more stable and consistent for many years to come.

How does one trade Dash?

Dash coins are mined in a way similar to Bitcoin, in which users must solve complex mathematical puzzles in order to earn the right to add blocks to the blockchain. When this happens, the miners receive as a reward, a certain number of Dash coins.

Brokers like Fortrade.com enable traders with valid trading accounts to trade on the rates of Dash, known as CFDs (contracts for difference). One of the advantages in trading Dash CFDs is that the trader does not need to actually purchase Dash currency in order to trade, and a properly timed Short call can net a profit even if the price of Dash goes down. Click on the link below to open a Fortrade account, and start trading today.

Trade Dash With Fortrade – Open FREE Account Today
Please note: Trading CFDs carries a high level of risk. Your capital is at risk.
For general information only. Not intended to provide investment or trading advice. 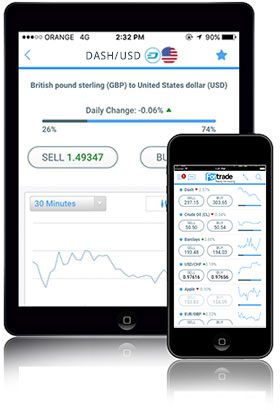