Sign up free
Use Fortrade to trade on Ethereum

Ethereum – Not Just Another Cryptocurrency

In recent months, there has been a lot of talk about Bitcoin, which has skyrocketed in value by more than four-fold since the beginning of the year. At the same time, Ethereum, which has many similarities to Bitcoin, but many differences as well, has also been on a meteoric rise, and it is worth taking a close look at what it is, in order to predict what we can expect of Ethereum in the future.

Ethereum (ETH on the trading markets), opened 2017 trading at $7.64, and on September 1, the ETH/USD hit $386.34. Since that peak, the Ethereum price has dropped a bit, but many investors seem unconcerned with this, and foresee a very bright future for the asset.

Ethereum uses a blockchain technology that enables developers to create distributed applications, contracts, etc. Within the Ethereum network is the cryptocurrency Ether, which can be used as a viable alternative to actual money, similar to Bitcoin. However, the primary use of Ether is to enable users to navigate the Ethereum platform, and pay for the applications within.

Ethereum – The Good, The Bad and The Ugly

Blockchain technology is especially good for cryptocurrencies, in that it makes the applications (and the currency) extremely safe from fraud and third part interference. To date, no hackers have successfully broken into the blockchain technology.

Ethereum and Bitcoin are not regulated by any governmental agencies, which can be both a positive and a negative. While lack of regulation can be frightening for some investors, it apparently has not hurt the market confidence in cryptocurrencies. More than $90 billion in Bitcoin and Ethereum are currently available on the market, and more than 100,000 vendors worldwide accept Bitcoins as valid payment for goods and services.

Even though Ether is meant first and foremost as a currency within the Ethereum platform, the cryptocurrency can be – and is – used for peer-to-peer transactions, much like Bitcoin.

While the ETH price is currently slightly below the $300 mark, blockchain technology continues to improve. Factors such as the instability of the Donald Trump presidency and the British preparation to exit the EU make investors increasingly concerned about the stability of the USD and the euro, so don’t be surprised if the ETH price resumes the upwards trend that it demonstrated earlier in the year when the Ethereum price chart shot up.

How Does One Trade Ethereum?

While it is very natural to compare the world’s two leading cryptocurrencies, the Ethereum vs. Bitcoin comparison is not a completely fair one. There are some common factors at which to look – for example that the Bitcoin software was created in such a way that there cannot, and will not, ever exist more than 21 billion Bitcoins. Ethereum, on the other hand, and its Ether cryptocurrency, has no limit.

Also, the blockchain technology used by Ethereum is much faster than Bitcoin, so Ethereum transactions are completed almost instantaneously, while Bitcoin may take several minutes.

That being said, it is important to remember that for all of the overlap between the two cryptocurrencies, they have essentially different goals, and need not be in absolute competition with one another. Bitcoin is exclusively an alternative to fiat currencies. Ethereum, on the other hand, has taken the blockchain technology upon which Bitcoin relies, to its next logical level – a platform of applications and contracts within which the cryptocurrency Ether is the key.

From that, Ether has also joined the ranks of other cryptocurrencies in a world that is becoming an increasingly cashless one, and as such, the Ethereum price chart is one that investors should continue to watch very closely in the months and years to come, as ETH/USD is likely to rise.

Over the months that Ethereum has been rising (and even during its briefer falls), traders have been able to take advantage of the volatility of this asset by trading Ethereum CFDs using the online trading platform provided by Fortrade. It should go without saying (but we will say it, all the same) that traders should always approach these trades with caution in order to develop the best strategies for buying (going long) and selling (going short). By learning what the market is doing, and what it can be expected to do in both the short- and the long-term, trading CFDs such as Ethereum can prove to be extremely enjoyable. By clicking on the link below, you can open an account, and you are ready to get started.

Trade Ethereum With Fortrade – Open FREE Account Today
Please note: Trading CFDs carries a high level of risk. Your capital is at risk.
For general information only. Not intended to provide investment or trading advice. 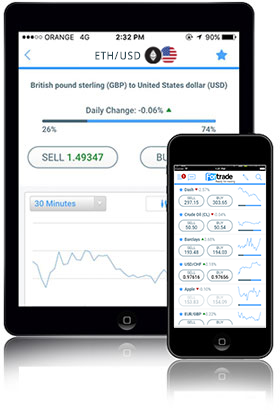