Sign up for free
Use Fortrade's platform to trade CFDs now

Investors have traded on stocks, commodities, and foreign currencies (also known as forex, short for foreign exchange) for several decades. In recent years, courtesy of the advent of the internet, the field has grown exponentially. Now, almost “overnight,” the world of trading has become open to pretty much anyone with a computer, anywhere in the world. More significantly, as we become increasingly entrenched in a world of global information, more people are able to learn how trading actually works. As a result, that which was once the exclusive domain of people who studied – and truly understood – financial markets, is today accessible to anyone willing to invest a bit of time learning from the plethora of available sources.

One of the biggest disadvantages about trading stocks, commodities, and forex, is that the cost can be prohibitive. While many stocks are affordable, often the ones that hold the greatest potential also carry a hefty price per share. The same is true with commodities, currencies, and – in the past year or so – cryptocurrencies (also referred to as digital, or virtual currencies).

One method of trading that an increasing number of brokerages are offering is CFDs, or Contracts for Difference. CFDs are tradeable assets, like currencies and stocks, but with two differences.

1. Ownership of the financial instrument:

If you purchase stocks, foreign currencies, or commodities, the bottom line is that you take possession, or ownership of whatever the asset represents. For example, buying 500 shares of a stock means that you own 500 portions of ownership of that company. Likewise, €1,000 may purchase, say, US $1,200, which would now belong to you. When you purchase CFDs, on the other, you do not take ownership of the asset. Rather, you are investing on how you believe the asset will move while the position is open.

For example, if you believe a price will rise, you can open what is known as a “long” position, in which you purchase virtual units of the asset (without owning them), hopefully to sell them later at a higher price. Alternately, you could open a “short” position, by selling virtual units of the asset to the broker, and purchasing them back when the price has dropped.

The easiest way to understand leverage that brokerages offer is to think of it as a loan that is measured in ratios based on the amount of the investment.

For example, imagine that you wish to invest $100 on a cryptocurrency CFD that is worth $5.00/unit. If you were to actually purchase the digital currency, your $100 would buy 20 units (or coins) of the currency. If the price rises to $8.00, your 20 coins will be worth $160, and if you choose to sell them, you would earn a profit of $60 on your initial investment.

Trading CFDs also works in the opposite direction. If you believe that the price of the cryptocurrency is going to drop, you could open a “short” position, in which you “sell” the 200 coins for $1,000, rather than buying them at the rate. If the price drops to $3.00, you can buy them back for $600, and enjoy a profit of $400.

It is important to bear in mind that, just as the potential for profit is higher, so are the potential losses. Staying with the example ample above, if you were “buy” the 200 virtual coins for $1,000, and the price fell, then closing the position and selling the coins back to the broker will result in a loss, rather than a profit (at a 1:10 leverage, this loss would be 10 times more than a loss on the same rates if purchased without leverage).

Bitcoin Through The Roof

Over the past year, the prices of several of the more popular digital currencies have gone through the proverbial roof. Bitcoin, Between December 1, 2016 and December 1, 2017, the price of one Bitcoin rose from $746 to more than $11,000. The price even reached as high as $19,000 before coming back down, and in recent months, it has been consistently trading in the $6,000-$8,000 range. Traders and speculators do not agree on what will happen in the short- or long-term futures. Will Bitcoin remain approximately where it is now? Will the prices go back up in to the $10,000 range and even higher? Or is the world’s first cryptocurrency past its heyday and destined to continue dropping?

One of the biggest advantages to trading CFDs, besides the fact that leveraged trades allow for the possibility of greater profits (along with the chance of greater loss), is that traders can conceivably earn a profit even when the price of the asset goes down. With the current uncertainty surrounding Bitcoin (and other cryptocurrencies), this enables them to remain relevant trading assets.

One cannot stress enough that trading any financial instrument – whether stocks, currencies, commodities, or CFDs – involves an element of risk. There are never any guarantees, and investors who jump in expecting a “get rich quick” scenario are likely to lose both their hope and their money relatively quickly.

Any financial investment requires patience, and an understanding of specific assets and of trading markets in general in order to be profitable. Fortrade is proud of the educational academy that it offers its users, and encourages all traders to make full use of the ebooks, webinars and trading videos provided within the website.

Trade CFDs With Fortrade – Open FREE Account Today
Please note: Trading CFDs carries a high level of risk. Your capital is at risk. For general information only. Not intended to provide investment or trading advice. 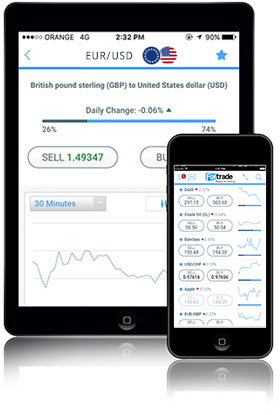 Should you proceed with investment in CFDs on virtual currencies, please note, that the values are highly volatile and may result in a significant loss for a short period of time.

This material does not constitute an offer of, or solicitation for, a transaction in any financial instrument. Fortrade accepts no responsibility for any use that may be made of the information and for any consequences that result. No representation or warranty is given as to the accuracy or completeness of this information, consequently any person acting on it does so entirely at their own risk.