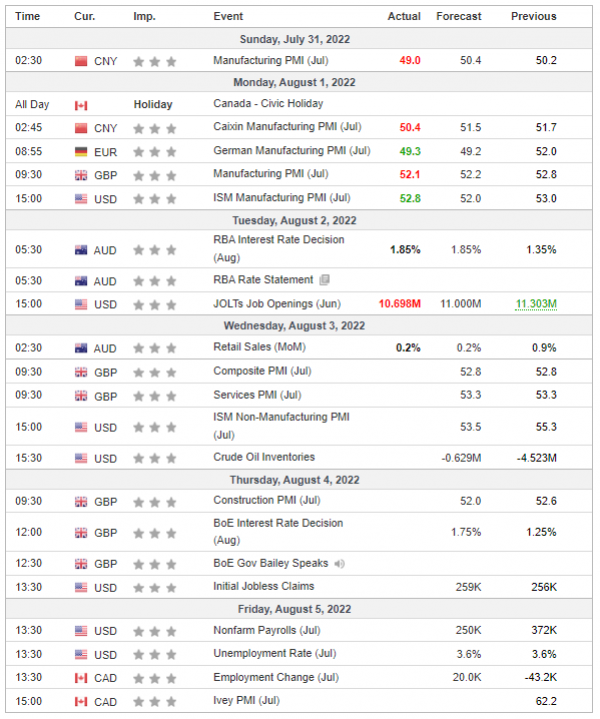 The euro climbed against the dollar after the Fed hikes rates by 75 basis points but the US GDP figures confirmed the US has entered a technical recession and traders now expect the Fed to pivot its policy with a 50 basis point rise predicted in September.

The British pound pushed higher and hit a one month high amid mixed UK economic data and a weaker greenback. The conservative party election race narrowed to two with either Rishi Sunak and Liz Truss set to succeed outgoing Prime Minister Johnson in September.

The Japanese yen continued its decline recording a two month low this week, despite a softer dollar.

Gold prices bounced higher last week capitalizing on broad dollar weakness. Indications that inflation may have peaked and that the Fed may soften its rate hikes alongside an increase in tensions between the US and China over Taiwan has supported the precious metal.

All major US stock indexes pushed higher. The earnings season moved into high gear last week with companies such as Microsoft, Tesla and Exxon all reporting better than expected results. Some 78% of companies reporting to date have posted beats.

Oil prices grew throughout last week but are falling ahead of this Wednesday’s OPEC meeting on worries over future demand. The oil cartel is expected to maintain its current output levels of adding 650,000 barrels per day but some analysts believe there is also the possibility of an increase.