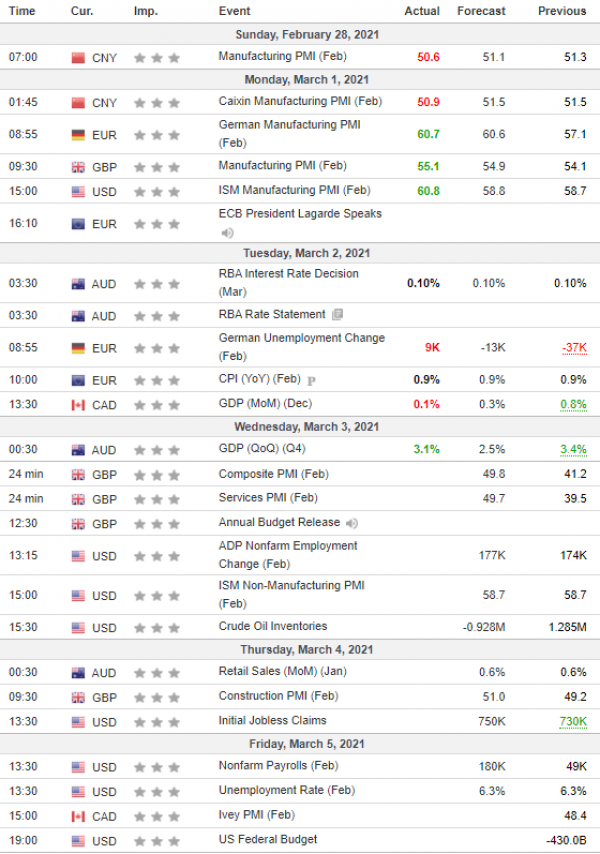 The euro weakened against the dollar as the rising US government bond yields continued to lure some investors back into the US bond market.

The British pound paid a high price for rising too long and too fast. Fears of the Brazilian variant of the coronavirus downplayed earlier vaccine optimism. Public health experts warned that with variants spreading, the battle against the virus can be completely lost after the hard-earned ground following the successful vaccination. The Japanese Yen weakened as the interest rate differential between the Japanese and US yield widened.

Gold extended its downfall, changing hands at some point close to $1,700. Higher US yields and growing interest in cryptocurrencies have tarnished the appeal of the yellow metal. The US government bond yields serve as a gauge of inflationary expectations and they have shaken the global financial markets across the world.

The US stock indexes were very volatile last week, but ended the week little changed. US ten-year yields have remained contained around 1.45%, allowing markets to recover on Monday but enough to support the rising dollar.

Oil prices were little changed. It rose to new highs this year but retreated on Monday on worries over possible supply increase from OPEC+. The group will meet on Thursday and could discuss allowing as much as 1.5 million barrels per day of crude back into the market. However, OPEC production plunged last month as the news was released that Saudi Arabia slashed its production by almost 1 million barrels a day, as promised. Output from the group fell by 920,000 barrels a day, the biggest drop in eight months, to 24.87 million a day.