Tesla Posts Better Than Expected Earnings for Quarter Two (Q2): The world’s leading electric car manufacturer posted $2.18 earnings per share, far better than the 3 cents per share predicted by analysts. Revenue rose to $6.04 billion in the second quarter, also better than the $5.37 billion analysts predicted prior to the report.

Shanghai Business Expectations: Tesla's Shanghai production has assumed the role of growth engine as the large potential market of early adopters drives a surge in demand and makes China the company's most important and voluminous market. According to Bloomberg, around 26,500 made-in-China Model 3 vehicles have been registered in the country over the last two months, an annualized rate of around 160,000 vehicles.

What is a Stock Split: According to Investopedia, a stock split is a decision by a company's board of directors to increase the number of shares that are outstanding by issuing more shares to current shareholders. For example, in a 2-for-1 stock split, an additional share is given for each share held by a shareholder. So, if a company had 10 million shares outstanding before the split, it will have 20 million shares outstanding after a 2-for-1 split. After a split, the stock price will be reduced. In the example of a 2-for-1 split, the share price will be halved.

Does Tesla Stock Split 5-to-1 (August 31, 2020) make it better available to retail investors? Tesla share experienced a stock split of 5-to- 1, opening at 442 on Monday (August 31) after the stock closed at 2213 the previous session. The Tesla shares had risen almost 40% since Tesla announce the split (August 11), to hit a fresh all- time high of $2317.98. Investors and traders continued to buy Tesla believing that the split might make the stock better available for the retail investors and traders. 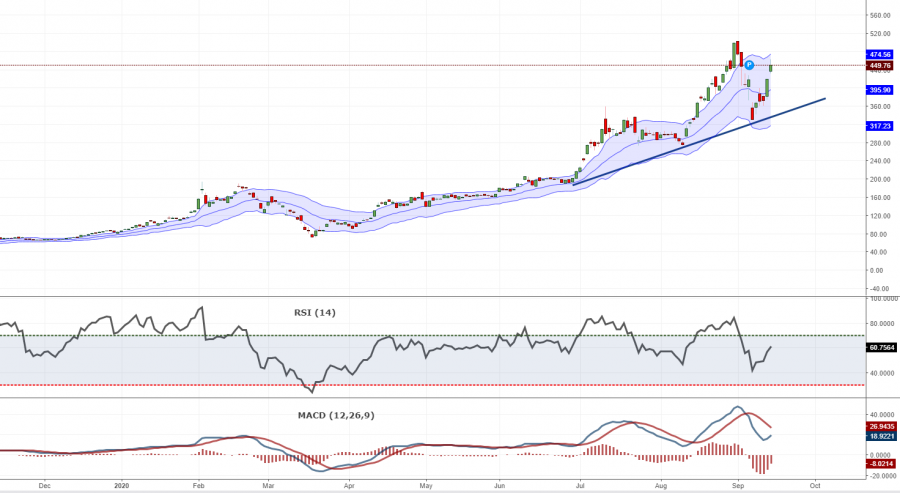 Example of calculation based on weekly trend direction for 1.00 Lot*

* 1.00 lot is equivalent of 1000 units
* Equity require for trading on 1.00 lot or 1000 share is 25.000$ (Margin level above 200%)
** Calculations for exchange rate used as of 09:45 (GMT+1) 16/09/2020
Fortrade recommends the use of Stop-Loss and Take-Profit, please speak to your Senior Account Manager regarding their use.
*** You may wish to consider closing your position in profit, even if it is lower than suggested one
**** Trailing stop technique can protect the profit – Ask your Senior Account Manager for more details